MELROSE—Saturday, May 30, high-end shoe store, Tony-K located at 7620 Melrose Avenue burned down after 30 years in business following rioters and looters.

Alan Kokozian, 45, was working in the store that afternoon. Kokozian was suspicious of violence to come that evening because of the recent civil unrest since the death of 46-year-old, George Floyd. Kokozian’s father and owner of the store, Tony Kokozian went home around 3:30. An hour later, Kokozian could hear people around the corner were screaming, ‘cops are pigs!'”

Kokozian reported, by 5:30 p.m. there was smoke in the air, ambulance and police cars coming up Melrose Ave. Later he could hear glass breaking to the store front of Urban Outfitters.

“I saw young people waiting in their BMW’s, Mercedes and Honda’s, dressed well outside of the store until they had access to run in and grab merchandise.” He said, “After 2-3 minutes new cars would pull up and do the same thing. Park, grab and go. Everyone was on standby.”

Tony K shoe store front is glass and shares a building consisting of three stores. Kokozian witnessed Dr. Martens, the adjacent store broken into followed by a male getting dropped off in a Range Rover to walk through the glass window and take what was exposed.

Around 7:30 p.m. Kokozian witnesses a male with shorts on, about 40 years old, 15 ft from away, kneeling down to grab an empty wine bottle out of a backpack with a cloth covering the top and a torch lighter which Kokozian referred to as a, “Molotov cocktail.” He lit the cloth on fire and chucked it toward Kokozian’s direction. Kokozian then kicked the bottle toward the street and a fire erupted.

Around 7:55 p.m. smoke was visible in Dr. Martens’ store so Kokozian left saying it was “just too much.” 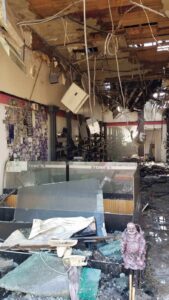 At 9:00 p.m. Kokozian was informed that the news was reporting on the destruction on Melrose, so he went back but was stopped by police.

The roof of the building caught fire and traveled to Kokozian’s shoe store causing $450,000 worth of damages in merchandise and an unknown amount of constructional damage.

Tony-K Melrose has been in business since July 1990. Their goal is to “rebuild.” Kokozian stated, “It needs more than a pat on the back. It needs money.”  His family is, “very sad about what happened.” There is a GoFundMe page where you can donate to the long-standing business.