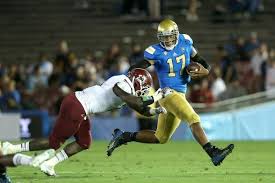 PASADENA—The UCLA Bruins were close to keeping their perfect season intact, but the Utah Utes had other plans on October 4. In a game that was close up into the final seconds, the Utes managed to edge out a win by two points over their opponents.

The Bruins struggled in the first quarter with the offense not being able to put points on the board, a Utah’s defense held them at bay. This allowed Utah to go into half-time with a 17-7 lead over UCLA.  The Bruins regrouped in the second half adding a touchdown to keep the lead within 10 points in the third quarter.

In the fourth quarter fuel was added to the Bruins fire as they scored two touchdowns giving them a 28-27 lead over their opponents. Unfortunately, it wasn’t the Bruins day as Utah managed to score a field goal to push their lead to 2. Quarterback Brett Hundley did his best to lead his team to victory, but a missed field goal by Ka’imi Fairbairn was the nail in the coffin. Hundley threw two touchdowns and passed for 269 yards in the game.

The Bruins don’t have much time to regroup as they will play the impressive Oregon Ducks on October 11.  With the Ducks capturing victory in their last five meetings, the Bruins will be looking to shatter that drought with a win as the underdogs.

The Division In The Country Looms

Adam And Sally Sleep Together On “Young And Restless!”