UNITED STATES—On Thursday, April 29, during an interview on the Morning with Maria Bartiromo Show, former President Donald Trump considered the idea of a 2024 presidential run.

“I ran twice, and the second time I got 12 million more votes than the first time,” Trump stated.

When asked whether he would consider having DeSantis as his running mate, Trump said, “He is a friend of mine. Certainly, Ron would be considered.”

“I endorsed Ron, and after I endorsed him, he took off like a rocket ship,” the former president said of DeSantis. “He’s done a great job as governor. They like that. I’m just saying what I read and you read. They love that ticket.”

In his interview, he indicated issues he’d use in his platform.

“The border has to be brought back where I had it,” Trump stated. Protecting the Second Amendment rights of the American citizens, tax policies, and energy independence would be priorities should he run for President again. 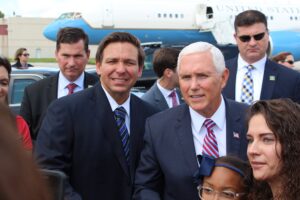 DeSantis has gained support from members of the GOP for his handling of the COVID-19 pandemic in his home state of Florida.

According to reports, DeSantis is considering a 2024 run. No formal announcements have been made.

Tweets from @RemoveRon leads to another link; secure.actblue.com, a Democratic run campaign effort that was aimed with attacks against DeSantis.

Rep. Randy Fine of Florida referred to Governor DeSantis as, “the best Governor in America.”

On April 28, in a separate interview on the Dan Bongino Show, Bongino interviewed Trump. The interview has been censored and removed by YouTube and can only be viewed following the link on Bongino’s website.

Bongino asked Trump if he would consider announcing a 2024 run for President, asking “Would you consider getting out really early, say after the mid-term elections?”

“If you do it, I think it would be good to do it right after the 2022 election…”, President Trump answered.