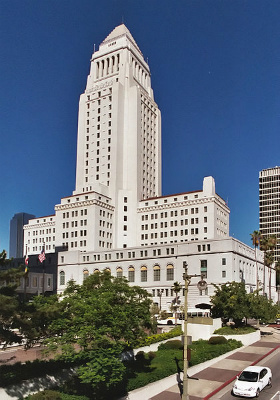 LOS ANGELES—On Tuesday, January 3, the Los Angeles City Council tabled for a week whether to direct the city attorney and Department of Building and Safety to draft a “clean hands” ordinance modeled after an L.A. County law requiring that conditional use permits be denied to applicants who have not resolved outstanding zoning code violations.

“Property owners with multiple violations have been allowed to obtain grading, building and other permits without first bringing their properties into compliance with zoning and other-land use requirements,” states the motion introduced by Third District Councilmember Dennis P. Zine in June 2011. “This is a major loophole in the land-use regulation enforcement process which allows for constant abuse.”

Zine introduced the motion for the ordinance in response to two L.A. city building inspectors having in May 2011 pleaded guilty to soliciting and accepting bribes for approving building permits. They were both subsequently fired from their positions.

Neighborhood associations from Canyon News’s coverage areas such as Mandeville Canyon in Brentwood, Holmby Hills in Westwood, Laurel Canyon, Bel Air, Pacific Palisades, Studio City, Sherman Oaks and Franklin Hills in Los Feliz have since voiced support for the ordinance. They want the draft shaped after the L.A. County law because of how it withstood several legal defenses from the Sahag-Mesrob Armenian Christian School in Altadena, Calif., which in 2008 was found operating without a permit.

Like with the county law, the Brentwood Residents Coalition (BRC) wants the city’s ordinance to weigh a number of factors in deciding whether to grant a waiver to permit applicants who unlawfully use their property. The coalition suggested granting applicants waivers if their property is used in a way that is not detrimental to the surrounding community. They would further have to prove that a disproportionate hardship would be created if they were not granted a waiver or that they are cooperating with the city to bring their property into compliance with the law.

But the BRC has suggested that the city ordinance be drafted so that the language is simpler than the L.A. County law. Instead of specifying that no permit will be issued to applicants whose land operates in violation of an already issued permit or of zoning codes, the BRC wants the city law to require that applicants be denied a permit if they are “not in good standing.”