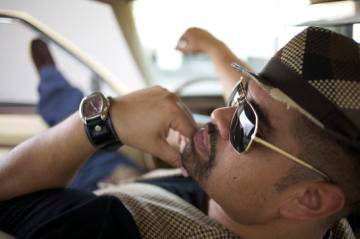 BEVERLY HILLS—Legendary Rap Superstar Heavy D died as a result of a blocked artery to the lungs. According to Los Angeles Chief Coroner Investigator Craig Harvey the cause of death has been determined as Pulmonary Embolism and deep leg vein thrombosis. It has also been reported that the performer (whose real name is Dwight Arrington Myers) had been suffering from Arteriosclerotic Cardiovascular Disease also known as heart disease.

According to the BHPD, Myers was returning home from shopping on the day that he died. He was having difficulty breathing and collapsed on November 8 at his Beverly Hills home; he was 44 years old.

Based upon reports the cause of the pulmonary embolism and deep leg vein thrombosis stems from a blood clot or poor circulation of blood to his lungs which he may have endured during his latest flight from Europe. He was returning from a performance he did at the Michael Jackson tribute concert in Wales a month before he passed. A toxicology report shows the presence of medication in Heavy’s D system but it was only on a therapeutic level.

The renowned performer began his entertainment career with the group Heavy D & The Boyz in 1987. He became popular with such hits as “Overweight Lover’s in the House” and “Now That We Found Love” in 1991. He also gained attention by composing and performing theme songs to television sitcoms “In Living Color” and “MADtv.”

The late rapper had several guest appearances on different television shows as well as movie roles, such as in “A Different World,” “Law & Order” and “Bones.” He also had a role in the film “Life” with actor Eddie Murphy. His latest appearance was in the 2011 Murphy film “Tower Heist.“

The two biggest performances he has had since a 15-year hiatus were the 2011 BET Hip Hop Awards show in October and the Michael Jackson tribute concert in Wales. His most recent album, “Love Opus,” was released on September 27. According to his official Twitter page, his last message before his passing was, “Be Inspired.”