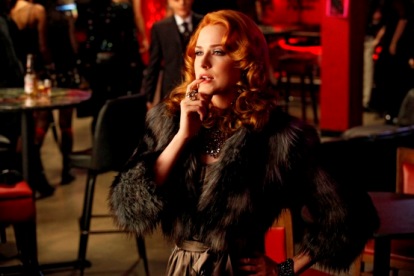 HOLLYWOOD—This coming Sunday night, we expect bloodshed and a lot of witches in Bon Temps, La. The King of Mississippi Russell Edgington and the Viking vampire Eric Northman both face the true death, as Eric used deception to draw Russell outside into the daylight and then he handcuffed the king so that they can both die by the sun’s rays. However, inside the bar Fangtasia, Sookie lies motionless on the floor with Bill unable to get to her in order to revive her. Fans all know that Sookie’s days are not numbered and she will ultimately be saved. Speculation of Russell’s demise may also be unfounded, as rumors that Russell will be a part of next season are all over entertainment news sites.

Lafayette will need Jesus to help him regain his bearings, but his powers eluded to by his mother are coming out faster than he is able to comprehend it all. Lafayette has always been a fan favorite and they are all excited about his secrets, which will be revealed on Sunday night.

Jessica will face danger as she and Hoyt’s relationship gets under his mother’s skin. Maxine wants Hoyt to be with her choice, who is Summer. Summer poured her heart and soul into trying to seduce Hoyt two weeks ago, to no avail. His heart belongs to a vampire named Jessica. Jason’s betrayal of the Bon Temps police department may leave him and Crystal in more danger than they had planned.

Tara will learn a deep dark secret about Sam and Tommy’s behavior causes even more trauma to an already emotionally unhinged Sam Merlotte. One of the most highly anticipated showdowns will be between Bill and the Queen of Louisiana, Sophie-Anne, who has waited centuries for a true fey. Sookie is that supernatural being, and the revelations of her very existence will create an unforgettable climax for Truebies on the season finale and even more drama next summer.

My advice is for viewers to hold on to your chairs on Sunday night. “True Blood” will end in a cataclysmic finale. The show that brought us vampires, werewolves, fairies, were-panthers and shape shifters, is shifting into high gear in preparation for the arrival of a coven of witches for season four. The finale will air on Sunday night at 9 p.m. on HBO. Be sure to tune in 20 minutes early for the pre-show of the season finale of season three.