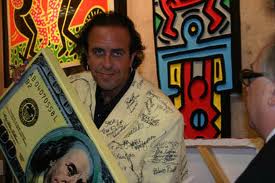 According to police, a friend of Kaufman found his body on the floor after he failed to show up at a breakfast meeting. It is believed that Kaufman died from natural causes.

Kaufman’s Web site highlights the artist’s biography and the development of his career. In 1972, he worked for Macy’s in Manhattan on 34th Street painting dog and cat faces on pet rocks. In 1975, he participated in a group graffiti show at the Whitney Museum. From 1978 to 1981, Kaufman enrolled in the School of Visual Arts, met his mentor Andy Warhol and became his assistant at the Factory. He designed theme parties at Studio 54, Mud Club Underground and Magique, and sold his art to Calvin Klein and Steve Rubell.

Kaufman’s other achievements include creating graphics for NBC’s Saturday Night Live, appearing on Fox TV, MTV and radio stations to speak out on racial harmony, moving the Art Studio to Los Angeles California to start “Comic Book Pop Art” in which he used original paintings of super heroes like Superman, Batman and Spider-Man as the icons.  He hired more than 100 of Los Angeles’ ex-gang youth from prison to assist him in the studio. By 1996, 325 of the ex-gang youth members had worked for the Art Studio and had moved on towards better lives, according to the Web site.

The Web site reports that Kaufman suffered from a cardiac episode and motorcycle accident during 1999-2000. According to the Web site’s bio, he quoted afterward: “I’m truly blessed to be doing what I’ve always wanted-CREATE.  I have found a freedom that is hard to put into words. I always wondered about my projects —which artists are working on what, and which directions should I take? I don’t even think of those things now. I passionately go into my studio and ask myself, what would I like to create today?”

During 2000-2001, Kaufman continued to support 170 charities per year, and the Kaufman Art Studio had hired 759 Los Angeles ex-gang youth and homeless men.

In April, 2003, Kaufman suffered a stroke that caused him to become paralyzed in one side of his body, according to the bio. He suffered a series of other health problems that eventually led to his second major stroke in 2009. However, Kaufman continued to throw himself into his lifetime passion. He states, “I climb mountains, I when sky driving, I walk halfway across USA, then I came back home, I looked into my soul and I like me, I can walk to South Central to East LA to Beverly Hills CA to High rollers card games in Las Vegas, I feel I’ve help and touched many people, I drove into my art like I never did before.I created the 6 color silkscreen method, I started wielding new metal Campbell’s soup art tables”.

Kaufman, of Sherman Oaks, had traveled to Colorado to participate in a show that promoted his work.