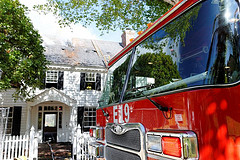 BRENTWOOD—On Wednesday, September 1, a fire damaged a house without any serious injuries to the owners or firefighters. The fire occurred on 485 Halvern Drive, a two-story single family home of 6,513 square feet.

Firefighters soon learned that a torch being used by the plumber had ignited construction materials and it soon spread to the fully finished third-level attic.  According to the Los Angeles Fire Department, the Brentwood fire is categorized as accidental.

Firefighters kept the confided flames on a central portion of the house, and extinguished the fire in 59 minutes. The loss of the fire is estimated at $352,000.