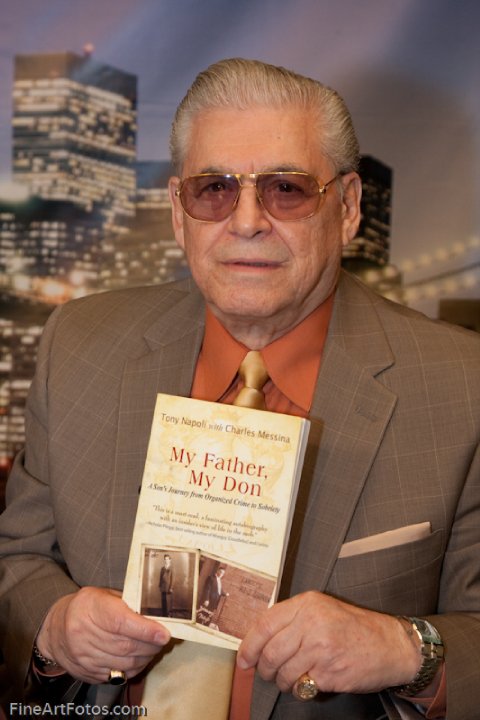 BEL AIR—Author Tony “Nap” Napoli has written his autobiography with great honesty and lots of surprises. What I loved most about Napoli’s book “My Father, My Don” is that Napoli doesn’t hide from the tough questions and he answers with truth. Napoli was a boxer, an army soldier, a mafia enforcer, a casino boss, a fugitive and a hustler. The man, however, doesn’t shy away from any of those former professions and speaks mostly with pride when it comes to his military vocation. Protecting and serving our country is something he embraced and still does. Napoli has turned his life around and after years of sobriety, he’s now working hard to assist veterans returning from war in the sobriety movement.

In between book signings, Canyon News spoke exclusively with the author who is just as used to hearing his rights to remain silent as he is talking about his past life in the mafia. Napoli agreed to no-questions off-limits and answered with truth and humor.

Q-When did you decide to write this wonderful book “My Father, My Don?”

A-“I started to write my story when I was 26 years old, I kept adding more to it day by day, week by week, month by month and year by year. I started in 1961 and published my first edition ’My Father, My Don’ in September 2008, and there is much more for a second edition.”

Q-Why did you feel it was the right time to tell your story about growing up in organized crime and its effects on you and others?

A-“I felt it was the right time for me to tell my story, which I call my autobiography and the authorized biography of my father, James (Jimmy Nap) Napoli, because all the big bosses in the mob that I grew up in are gone, died off from old age some while doing time and others while living their last days with their grandchildren. There are those who were killed in this lifestyle of ”˜kill or be killed.’ I thought the mob life was the only way to live and gain the respect from others who were in the mob as well as those who weren’t.”

Q-Has anyone threatened you since you published this best selling book?

A-“As a matter of fact no one has seriously threatened me because of my book only with words. For example, I was recently told ”˜Tony Nap you are going to open up a can of worms if you publish your book,’ but my answer was, when I talk about my father, I will open up a carton of caviar. Most of the new bosses sent their scouts out to my house to get autographed copies of the new book with only my signature on the title page of the book. They all confirmed it’s a beautiful story about the bond between a father and son that is stronger than Omerta, the oath taken by members of organized crime families.”

Q-Was writing the book a cathartic process and did you find you remembered a lot that you had previously forgotten about?

A-“Tommy, I hired and paid a fee to three writers to help me put my book into story form after researching my excerpts. I felt very free and comfortable with no thoughts of revenge to those I felt did me and my father wrong, as we earned and lived the mob lifestyle. I concentrated mostly on the relationship I had with my father. While piecing the excerpts together, I was able to remember things that I had forgotten about in the past.”

Q-You celebrate sobriety today. How long have you been sober?

A-“After my father passed away of old age on December 29, 1992, I started to drink heavily day and night with no sleep for about a year and a half after his death. I went into an alcoholic coma for 10 days and nights. I remember talking to all those who I loved and died before me while I was in the coma. I made amends to them and promised them that if I was to live, I would try to do only good and help those that need my knowledge and experience as a volunteer in programs such as helping disabled veterans to be compensated for their service-connected injuries, to help indigent former prize fighters through an organization called ”˜Ring 8 Boxers,’ helping boxers who can’t afford to buy their medication when they retire due to injuries or otherwise, and helping recovering alcoholics to find sobriety programs. Today, every July 11, is my anniversary in sobriety, this July 11 will be 16 years for me in sobriety. My sobriety started when I woke up from my coma and saw my wife and children crying for me at my bedside in the VA Hospital-Fort Hamilton in Brooklyn.”

Q-Are you in the witness protection program?

A-“There is no way I will ever be in the witness protection program. I penned my autobiography and self published it. I paid over $40,000 of my own money to do so, I consider myself an author, no one gave me any money or made any deals for me to expose the demons who ruled my life, I talk only about my business and nobody else’s in my book. One might say how the hell can he write this story? I say, how can I not. I am prepared to go to jail if questioned by the government about the statue of limitations in certain aspects of my story and anything else that I might know that will cause jail time for others. I will take the fifth, that my friend is not the witness protection program and don’t insult me again by even mentioning my name with those lying rats that are in that program.”

Tony “Nap” Napoli said in the beginning of this interview that he was going to tell me the truth and answer any questions I had for him. He really is a strong patriot who loves America and works tirelessly for our returning veterans and anyone who needs his help.