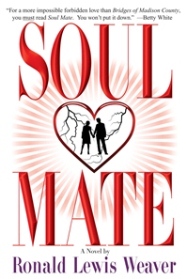 BEVERLY HILLS—On a recent flight, a passenger asked me about the two books that I had in hand. One of them was a recent bestselling novel by a friend who is a famed producer of one of television’s most successful daytime dramas and the other was by a Hollywood historian and longtime friend whose love for his muse made him determined to delve into her background and explain to her fans and readers how Hollywood stardom can often derail one’s life from safety and obscurity. “Soul Mate” is a deliciously adventurous story filled with subjects that remain the major headlines of the current era in America, and “Kiss Tomorrow Goodbye: The Barbara Payton Story” is ripped from our former headlines, those written by entertainment mavens Hedda Hopper and Louella Parsons.

“Soul Mate” is exciting to the touch. From the first page to the point where the illicit love affair between an older female teacher and a younger male student at Beverly Hills High, readers are locked into a dangerous scenario that evolves into a solution that makes you feel as if you have broken one of mankind’s most serious taboos. Actress Katherine Kelly Lang, who portrays Brooke Logan Forrester on “The Bold and the Beautiful” summed it up best, “Before I read this book, if you’d told me I’d be rooting for a relationship between a teacher and her student, I’d have said, ”˜You’re crazy.’ But these are great characters and a great story.” Betty White adds, “Not since the ”˜Bridges of Madison County’ have I been so involved in someone else’s very private life.”

Author Ron Weaver spoke with us about the success of “Soul Mate.” “After I started getting hugely positive responses from everyone who read the final draft of ‘Soul Mate’, I began to daydream, of course, that it would really take off. Books sell largely by word of mouth (or by keyboard these days). People want to know that a book is good, and they’re looking to get the feeling that they’d enjoy reading it. Luckily, word seems to be spreading quickly and it’s only been a month since the book launch event. I’m getting terrific reviews, and WOW! Bestseller has a nice ring to it don’t you think?” said the author. I could not agree more.

“Soul Mate” is available at SoulMateTheNovel.com.

John O’Dowd who exhaustively researched the professional and private life of one of Hollywood’s most tragic leading ladies, Barbara Payton, managed to find unknown facts and details about the life and death of one of WB’s top B-actresses. With the support of the late star’s son, John Payton, O’Dowd managed to peel back the layers of pain and anguish the tragic actress suffered and secrets many press agents at the studio had managed to hide from the public’s awareness at the time.

This is the best biography written in the past decade. O’Dowd is very grateful for the attention and acclaim his book has received, but gives full credit to the subject herself. “It was Barbara’s life and career that captured my attention. I hear her crying out to today’s starlets, that if they don’t change, the same tragic destiny she faced can also be that of today’s hottest stars,” concluded the author.

Over 300 Protestors, Rioters Arrested In Twin Cities Over Weekend