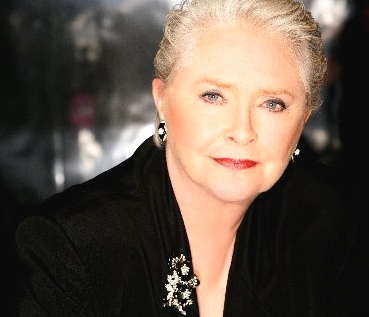 HOLLYWOOD —This week Susan Flannery and Karen Black make the cut for two of Hollywood’s most beautiful women. Both are dynamic women, who are creative geniuses and award winning actress. From previous articles, everyone knows how much I admire Susan Flannery for her incredible work on the CBS daytime drama “The Bold and the Beautiful.” Others know that I consider Karen Black to be one of the most critically acclaimed actresses of this era. Both ladies shine on stage, screen and on red carpets. I can’t think of two actresses who deserve so richly to be included in our true beauties feature as the two we have chosen.

Ms. Flannery devours the competition every single day on the most watched show on the planet, “B&B.” Susan is one of the strongest and most multi-talented actors of the past century. Stephanie Forrester may be the reigning queen of Beverly Hills, but in my book “The Making of Hollywood Stars” I call her portrayer, Susan Flannery “an act of nature.” Her forceful and incredible performances are the stuff of legends. However, before she was a force on “B&B” and a daytime diva, Susan won the Golden Globe award for Most Promising Female in 1975 for “The Towering Inferno,” which starred Robert Wagner, Steve McQueen and Paul Newman just to name a few. She has been nominated for The Soap Opera award seven times. Susan has been nominated once for the primetime Emmy award in the Lead Actress/Limited series category, been nominated twice in the Director’s category for the Directors Guild Award, has won Best Lead Actress Daytime Emmy award four times and been nominated a total of eight times for the category.

However, Ms. Flannery’s silver-laced hair and deep sea blue eyes are two of her greatest physical attributes. Her voice is golden, it sounds almost majestic as you listen to her narrate or even read off her nemeses on her soap. Susan proves you can be over 40 in Hollywood, still work every day and still be considered an iconic beauty as well.

Then there is Karen Black, who is about to premiere in another play this month in Santa Monica. Karen is one of the great actresses of this generation as well. Also a Golden Globe winner, Ms. Black won in 1971 for “Five Easy Pieces” and again in 1975 for “The Great Gatsby.” A winner of the NY Critics Circle for Best Supporting Actress, once Grammy nominated, a total of three Golden Globe nominations, and even an Academy award nominee, Karen is still a hard working thespian. An elderly but brilliant Bette Davis told me in 1976 that Karen was on her short list of women who will become great actresses.

The dark-haired raven with flawless skin and the perfect shaped mouth has rarely traded on her exquisite exotic beauty in order to get a role. However, once she has the role, directors and producers know that they have a brilliant actor who knows all the right moves and the perfect timing.

These two ladies are Hollywood beauties with talent, unlike the tabloid reality princesses who dominate our magazine covers and the entertainment shows, which have lost interest in the classy, classic ladies who make Hollywood the most sought after ticket in the world.

How To Spot A Legitimate Horse Racing Betting Website

Lawn Weeds Are Low Down And Dirty