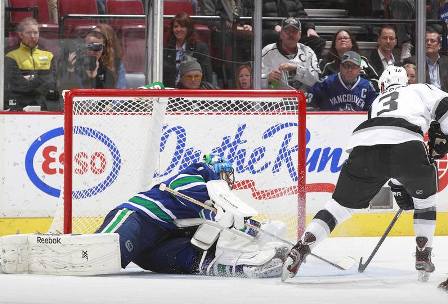 VANCOUVER—Anze Kopitar ended the fight of all fights for victory. The Kings star center sent the puck into the net 48 seconds into overtime to defeat the Vancouver Canucks 3-2 at Rogers Arena Monday night.

With the Kings coming off a tough loss on Saturday, a win on the road against their new Pacific Division rivals could put them closer into gaining the lead. The period began with both teams fighting for the puck and each other. Alexander Burrows and Daniel Carcillo took unsportsmanlike conduct penalties that sparked the mood for the remainder of the game. The Kings responded on the opening goal with a 2 on 1 that left Kyle Clifford scoring his second on a backhander. LA outshot the Canucks 13-11, but with Carcillo red hot from his scuffle with Burrows the second period would impact the role of the game.

The Kings put a mark on Canucks defenseman Alexander Edler as Willie Mitchell took a call for roughing, five and a half minutes into the period with Justin Williams targeting Edler five minutes later. Both teams let their emotions loose as it sparked both teams to accumulate penalties with Carcillo earning a game misconduct along with Zack Kassian for their fight. Tom Sestito’s name was added to the list of players unable to return to play.

Jordan Nolan got into it with Canucks defenseman Ryan Stanton which in turn led to a pair of fighting majors. As the dust began to clear, it was Christopher Tanev who scored his first of the season to tie the game. The Kings were not done showing their anger as Mike Richards and Robyn Regeher took additional roughing penalties for the Kings roughing it with Burrows and Ryan Kesler.

The game finally got back to normal at the start of the third period, but withVancouver holding their ground and gaining more time on the offensive side of the ice; it would take leadership to stand up front. Henrik Sedin did so forVancouver on the power play that set him up for his seventh on the year and gave his team the lead.

Midpoint into the third, the Canucks were outshooting them 7-3. It would go to the brink of desperation for the Kings as Mike Richards scored on a wraparound from a Jeff Carter rebound to tie the game and grab his sixth. At the end of regulation the Canucks outshot Los Angeles 39-21, but as usual OT could go either way.

It took 48 seconds for Kopitar to end it with a bouncer from Slava Voynov into the Canucks end. That led to Kopitar gaining possession with the puck in a perfect position to send a wrister over Roberto Luongo and hold off yet another defeat. It was Kopitar’s seventh of the season and a winner that put them in a tie with their upcoming opponents from San Jose.

Though the team won the game, their biggest help on the defense came from goaltender Ben Scrivens who held off Vancouver’s blast of shots to the net making a season high 37 saves in his sixth win of the season. As they meet the Sharks on Wednesday, a fight for second place comes to the Kings path in their mark towards further success.