UNITED STATES—On Friday, November 19, Kyle Rittenhouse, 18, was cleared of all charges in the deaths of two protestors and the injury of a third in Kenosha, Wisconsin back in August 2020. Rittenhouse was 17 at the time of the shooting.

The jury deliberated for three and a half days before finding him not guilty of the felony charges of reckless homicide and the use of a dangerous weapon in the death of Joseph Rosenbaum, and reckless endangerment, use of a deadly weapon, Rittenhouse was found not guilty. The testimony provided by Ritchie McGinnis noted that Rittenhouse was in the line of fire.

He found not guilty in the charge of reckless endangerment, use of a deadly weapon, or the death of Anthony Huber. Video captured shows Huber wielding a skateboard at Rittenhouse and kicking him in the head.

In the charge of first-degree intentional homicide, use of a dangerous weapon, Rittenhouse was found not guilty. Video showed Huber attempting to take Rittenhouse’s gun.

In the charge of attempted intentional homicide, use of a deadly weapon in the case of Gaige Grosskreutz, Rittenhouse was found not guilty. He did maim Grosskreutz permanently and was reportedly using an AR-15 he borrowed from a friend. When Rittenhouse shot back, Grosskreutz lost his arm, but survived injuries sustained.

One individual noted during the Grosskreutz and Rittenhouse shooting, Grosskreutz’s bicep became a “pink mist.” He lost ninety percent of his bicep.

The possession of a dangerous firearm by an individual under the age of 18 was dismissed.

For the count of failure to comply with an emergency order for state or local government, the judge dismissed the charges indicating that prosecutors did not provide enough evidence on this charge. 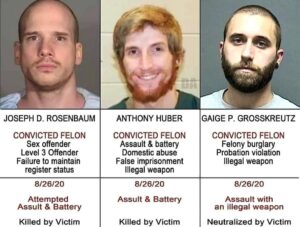 In an exclusive report, Daily Caller reporter, McGinnis stated that while he was trailing, Rittenhouse testified that Rosenbaum was lunging at Rittenhouse with a gun.

Bystanders captured video footage of Rosenbaum chasing Rittenhouse and throwing things at him. Rittenhouse reportedly hid behind a car, with Rosenbaum still giving chase, while Rittenhouse shot at him.