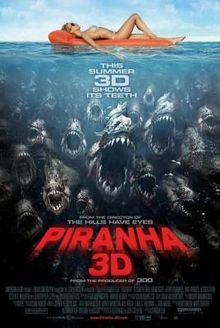 HOLLYWOOD—Steven Spielberg’s 1975 classic “Jaws” made people afraid to go into the water. Well it’s been quite some time since that film, but “Piranha 3D” will definitely cause audiences to rethink the notion that there’s nothing in the water. “Piranha 3D” marks the return of the B-movie, and it’s an exhilarating ride that will have you squealing in your seat. The film is about pre-historic piranhas that are released near Lake Victoria after an earthquake. It has some great visuals.

Elisabeth Shue stars as Julie Forester, a tough as nails sheriff that is determined to protect her family and city from these flesh-eating amphibians. The hero of the film, Jake Forester (Steven R. McQueen), longs after the affection of college girl, Kelly (Jessica Szohr), who in the beginning comes across as potential heroine of the film but later becomes a damsel in distress. Jerry O’Connell is a hoot as a director filming co-eds going wild on spring break.  His one-liners and over-the-top antics make him the most memorable character in the film. Supporting roles by Ving Rhames, Christopher Lloyd and Adam Scott are well played.  The opening sequence featuring “Jaws” alum Richard Dreyfus is a treat and will definitely have audiences jumping out of their seats.

The 3-D effect does not heighten the experience of the film. There are very few scenes where fish or body parts come flying at you from the screen, but that’s the only flaw I saw.  Paying the additional $3 bucks for those glasses was a waste.

“Piranha 3D” works so well because it’s classic camp. It’s the movie that is supposed to be so bad, it’s good. Of course, there are stupid people and slightly developed characters in the film, but that only gives the audience more reasons to shout at the screen.  If a sheriff fires shots and yells for everyone to get out of the water, it’s not wise to respond by drinking more alcohol and jumping back into the water. If there’s one thing I hate in horror films it’s stupid characters.  They always seem to get your emotions running high and you can’t control what your mind is thinking.

The bloodbath when the piranhas attack the group of college students on the lake is gruesome to say the least.  This is definitely not a film for the squeamish; whenever you see people get up and leave the theater you know you’ve pushed the limits as a filmmaker.  Beyond seeing ripped body parts, scared bones and flesh peeling from the skin, you find yourself in the shoes of the characters. You begin to ask yourself what you would do if you were in that situation.

This film has more blood then any horror film I’ve ever seen, and that says a lot.  There’s also a fair share of nudity in the film. If you’re looking for a movie that will engage you and have you grabbing your theater seat, “Piranha 3D” is the film for you.  I’d suggest seeing the film without the 3-D, but it’s a fun ride that you’ll be glad you took.