BEVERLY HILLS—Protests turned violent outside of the Beverly Hills Hotel on Tuesday, September 17 during President Trump’s visit to the ara..

President Trump flew into town on Air Force One over an area a farmer prepared in support of the Commander in Chief. 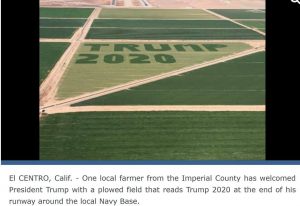 A small group of protesters gathered outside of the Beverly Hills Hotel.

ABC7 News captured footage of the incident showing a circle of people surround one protester who was burning a U.S. flag, reported the anti-Trump group called themselves “Refuse Fascism.” A Trump supporter stepped in attempting to stop the flag burning, and the protest turned into a brawl.

Police officers broke up several fights, detaining some individuals, but no arrests were made.

The Refuse Fascism Facebook page has a logo that reads, “This nightmare must end. Trump & Pence Must Go! In the name of HUMANITY, we refuse to Accept a Fascist America.”

President Trump in Beverly Hills to attend a fundraising event at the home of Los Angeles developer, Geoffrey Palmer. Palmer has been a large donor to both the Republican Party, President Trump’s 2016 election. The fundraiser was the second leg of a President’s Trump trip to draw in close to $15 million to his re-election campaign. Tickets for the event cost between $1,000 for individuals to $100,000 for couples.

President Trump ended a three-day fundraising trip by viewing progress of California’s border wall near Otay Mesa by helicopter to see the border.