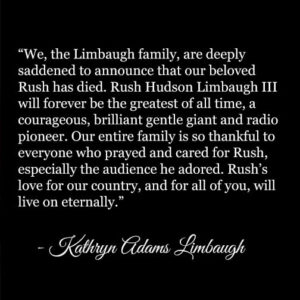 Rush leaves behind his wife of 11 years, Kathryn Adams Limbaugh. According to reports, the couple had Elton John sing at their wedding in 2010 and they met writing children’s books together in a series titled, “Adventures of Rush Revere.”

Numerous celebrities, fans, and friends sent out their condolences via social media.

Limbaugh’s obituary in the Chicago Tribune describes his way of being blunt and conservative all at once while drawing an ever-growing audience.

Fellow radio show host and author, Jordan Sekulow, shared the following on Rumble, “Rush Limbaugh, the talk radio host who ripped into liberals and laid waste to political correctness with a merry band of malice that made him one of the most powerful voices on the American right and foretold the rise of Donald Trump, died Wednesday. He was 70.”

Sekulow who is also the ACLJ Executive Director and Ric Grenell who is the Special Advisor for National Security and Foreign Policy discussed the life and impact of conservative talk radio pioneer Rush Limbaugh.

Author and political commentator, Candace Owens tweeted “He is an American icon that can never be replaced.”

Fox News’s Greg Kelly replayed the video of former President Trump announcing Limbaugh, the Medal of Freedom at the State of the Union Address on February 4, 2020.  Trump spoke of Limbaugh indicating he didn’t know Limbaugh, who he first met  after an escalator ride Donald J. Trump took at the Trump Tower in New York to announce his first run for POTUS. Trump and Limbaugh later became friends where they would regularly play golf.