The LAPD reported that the suspect frequents the area of Western Avenue and Santa Monica Boulevard where he approaches his victims and lures them into his vehicle. Once inside, the suspect drives to areas away from vehicular and pedestrian traffic and line of sight. On multiple occasions, the suspect will produce a firearm and demand sexual acts be performed on him. He has acted out in violence in these incidents and physically assaulted his victims. 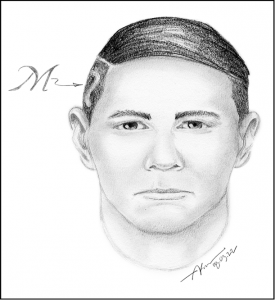 The suspect may go by the name of “Mainer” (Maynor or Mainor) and has tattoos on both arms. The suspect has worn hairstyles with an “M” shaved on the side of his head, but may recently changed his hairstyle.

The suspect is further described as a Hispanic male, between the age of 25 to 35. He has black hair, brown eyes, and stands at approximately 5 feet and 8 inches tall. He has a military background and may be employed as a security guard. Detectives have reason to believe that the suspect is in a relationship and possibly has a young daughter. He drives a newer model four door sedan, possible Honda, that is dark in color. The vehicle may have tinted windows and a rear spoiler.

Detectives are requesting that anyone with information on the suspect or potential victims to contact the Special Assault Detectives, at 213-473-0447. During non-business hours or on weekends, calls should be directed to 1-877-LAPD-24-7 (877-527-3247). Anyone wishing to remain anonymous should call the LA Regional Crime Stoppers at 1-800-222-TIPS (800-222-8477) or go directly to www.lacrimestoppers.org. Tipsters may also visit www.lapdonline.org and click on “Anonymous Web Tips” under the “Get Involved-Crime Stoppers” menu to submit an online tip. Tipsters can download the “P-3 Tips” mobile application and select the LA Regional Crime Stoppers as their local program.