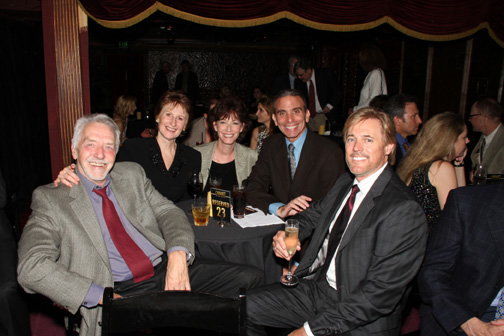 HOLLYWOOD —Brassy, sassy, bold and brazen, Shelly Goldstein’s thigh-high boots are made for walking, right up onto center stage and into the hearts of the audience. Cabaret at the Castle featured Goldstein’s tribute “One Fine Day” to the groovy girls who influenced and defined an era known as the ’60s, “and in the ’60s we were girls” recalls Goldstein, adding “It was a time for natural beauty and letting it all hang out. Now, it is all about tucking it back in.” Patrons not only laughed out loud with the hysterically funny Ms. Goldstein and reveled in songs that defined a decade, but also walked away with new knowledge and trivia about icons such as Dusty Springfield, Carole King, Laura Nyro, Mama Cass Elliot, Carly Simon, Lesley Gore, Nancy Sinatra, Lulu, The Beatles, Yoko Ono, The Who and more.

Her unique talent for lyrics and their ensuing mental images offers fans an unforgettable and exclusive Goldstein imprint on such classic titles as “Georgy Girl,” “Not Getting Married,” “Up On The Roof,” “Downtown,” “These Boots are Made for Walking,” as well trademark Goldstein renditions of favorites like “Un-Natural Woman,” her YouTube hit “The Middle Age of Aquarius” (http://www.youtube.com/watch?v=nU3FMI7voYo), and a politically irreverent take on the Sherman Brothers’ “Supercalifragilisticexpialidocious” from Mary Poppins entitled “Stupid Callous Homophobic Hateful Legislation” that actually had the audience members Umdidaliling along.

Ms. Goldstein is one of the busiest writers of awards shows in Hollywood, New York and the UK. She frequently works punching up screenplays and writing special material, comedy and song lyrics for performers. Shelly has doctored scripts or written special material for such artists as Steve Martin, Sharon Stone, Cybill Shepherd, Liza Minnelli to Donald Trump, James Earl Jones, Eva Longoria, Whoopi Goldberg as well as Steven Spielberg, George Lucas, Norman Lear and even Princess Caroline of Monaco and Yoko Ono.

The Magic Castle’s Cabaret at the Castle has become the venue to see and be seen. “I have to confess,” says Magic Castle co-founder Milt Larsen, “I wasn’t at all convinced that a cabaret series was a good idea in the beginning. But the quality of the performers has been tremendous and I have become its biggest fan.” Cabaret producer, Matt Patton, currently has a waiting list for both patrons and performers. For scheduled appearances call 323-851-3313 x434 or e-mail broman@magiccastle.com.