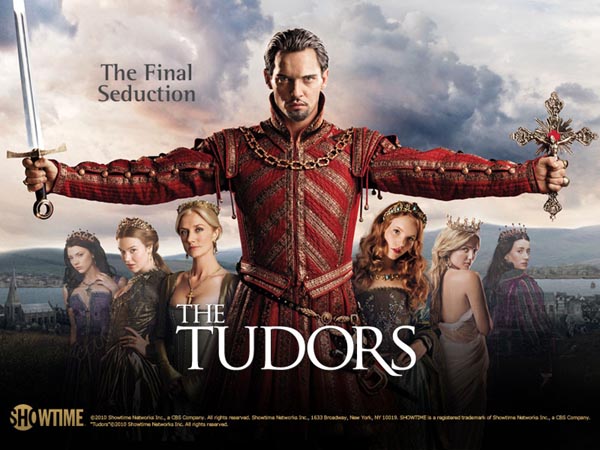 HOLLYWOOD —Tonight the return of SHO’s “The Tudors” debuts season four with a middle-aged King Henry VIII, portrayed by Jonathan Rhys Meyers, marrying his fifth queen, lusty, teenage bride Katherine Howard. Though beautiful, the king’s new queen has a checkered past and she’s soon involved with her male secretary, once a trusted royal courier named Thomas Culpeper. The exciting episode is written by historian and prolific writer Michael Hirst and directed by Dearbla Walsh. As season three ended last year, Henry had rid himself of three unwanted wives, Katherine of Aragon, Anne Boleyn and Anne of Cleaves. Anne’s death was brutal and by the sword, as she was falsely convicted of adultery and treason to make way for the king’s third wife Jane Seymour. Jane’s fate was death, but not by the hands of her King. Jane died soon after giving birth to Prince Edward, the only legitimate son of King Henry VIII. Prince Edward would become king at the age of 9 when his father died. Anne of Cleaves was Henry’s fourth wife. For some reason unbeknownst to anyone but Henry, he found her unattractive and failed to consummate the marriage, so Anne luckily left the marriage with both her head and her virginity intact.

Cromwell’s head was cut off and hung on the London bridge facing away from England to the joy of many Catholics in England, most especially Henry’s first born child Mary. The season picks up with Mary being very unimpressed by her new and much too young stepmother Katherine Howard, Henry is foolishly in love yet again and the people around Henry are starting to fear the older and more ruthless and unpredictable king.

This season called “The Final Seduction” finds Henry in just as many predicaments as an older middle-aged man as his life was as a young lad. Henry battles inner demons, which ultimately drive him insane after he beheads his fifth wife. The episodes leading up to this climax will keep fans of the hit ShowtimeÂ® drama on the edge of their seats. “The Tudors” remains in its last season one of the most well written, acted and produced shows in TV history. Henry the VIII was perhaps Britain’s most well known figures and his reign is remembered as brutal but also leaving a lasting legacy. Henry successfully pushed the Roman Catholic Church out of England, and by creating the Church of England, he was able to marry again and again and also build a new religious power base that lasts to this day. Queen Elizabeth the II is currently the leader of The Church of England, which Henry founded in the early 16th Century.

Henry’s best friend, if he had any, was Charles Brandon, the Duke of Suffolk. Brandon is played by the extraordinarily talented Henry Cavill, who is also one of the most handsome men currently in entertainment. Even the heavier makeup this season to age the character can’t cover up his Clark Gable-esque appearance and his dynamic ability as a trained British thespian. Long after “The Tudors” Cavill will be one of Hollywood’s most bankable leading men on the big screen as well.

Sarah Bolger as Princess Mary also is an amazing standout in the series. Last season we watched as Mary’s heart was broken for the umpteenth time, which leads her into this season more toughened and far more cynical, as her real-life counterpart was known to be. In history Mary was ultimately coronated Queen of England and her reign was so brutal on Protestants that the devout Catholic monarch was non-affectionately called “Bloody Mary” after her death.

Join fans of “The Tudors” and enjoy the premiere that will leave you breathless to say the least on Sunday night on SHO at 9 p.m. on April 11. Join the show’s official Facebook page at Facebook | The Tudors.