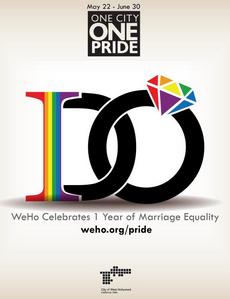 WEST HOLLYWOOD – The City of West Hollywood celebrates one year of marriage equality with “40 Days of Pride Through the Arts.” The 40 day long event begins on May 22, Harvey Milk Day and continues on until the end of the month of June.

Starting Thursday, May 22, a special exhibition and reception of the film “Love is Love: The Five Year Road to Marriage” will be shown from 7:00 p.m. to 9:00 p.m. at the West Hollywood Library located on 625 N. San Vicente Boulevard in West Hollywood, CA. The documentary film and community awareness project that followed the “grassroots LGBT activism in Southern California.” To RSVP to the event visit: https://www.facebook.com/events/451913628244283.

Kicking off the parade is the Lavender Menace, which is an event celebrating women. Mary Lambert who provided the chorus for Macklemore and Ryan Lewis’ song “Same Love” will be in attendance at Friday’s event along with Betty, who sang the song “Somebody Loves You” or it’s usage of a same gender wedding proposal in a video filmed at Home Depot.