UNITED STATES—Our nation is being RUINED at its core, while allowing politicians and media to lead us where they WANT our attention directed: the incidental aftereffects of the “PROBLEM.”

We scream that there are nearly 470,000 heroin (opiate) addicts in the US, while ignoring more than 1.5 million opiate pill addicts. In the doctor’s defense: I do NOT believe it is merely lazy doctors doing this.

It MUST be getting tiring for health care professionals to deal with people who expect doctors to take better care of them than they are willing to do for themselves. Doctors prescribe medication to help patients rest, and then rehabilitate. Instead many do not rest, or take pills without doing the therapeutic exercises or recommendations for healing.

Take an example of Broome County, home of Binghamton, NY: the “worst place in America to get sick.” As with many other areas in this country, the entire region is fighting a heroin EPIDEMIC and there are hundreds of localities like this, everywhere in the country.

The area began as a logging, agricultural and manufacturing hub of cheap labor for 2 centuries. Factories (cigar, shoes, wood products), the canal, and confluence of rivers, made it a trade and transportation hub in the 19th century. Workers formed cities, towns, and villages surrounding the rivers.

Studies have shown that these areas (high poverty, overcrowded families, alcoholism) produced thousands of children who frequently matured into adults with the traits and behavior of the parent (mental illness, alcoholism, abuse, etc) and Binghamton is a good example of it, becoming home to the very first inebriation asylum.

Coincidentally there is a large ‘conglomerate’ of United Health Services (UHS) facilities, and I believe companies like them play a BIG part in where the state of Social Security Disability is in today.

Teaching facilities starting popping up in these low income areas where bodies and minds were severely damaged from overuse and abuse. They found the perfect test dummies in the 1960s-1990s New York, before patient consent.

Poor people with chronic ailments and pain made the IDEAL teaching subjects needed for the perfection of exploratory procedures like colonoscopies and laparoscopies. I believe that some chronic pain with NO known cause is from ADHESIONS – internal scar tissue leftover from any procedure that cuts the skin, doesn’t show up in x-rays.

If we compare the teaching hospital counties of New York, with social security disability and population statistics for the year 2014, we see that there is a higher amount of disability recipients in the counties where there are teaching hospitals, except for those listed in the top ten wealthiest counties in New York. 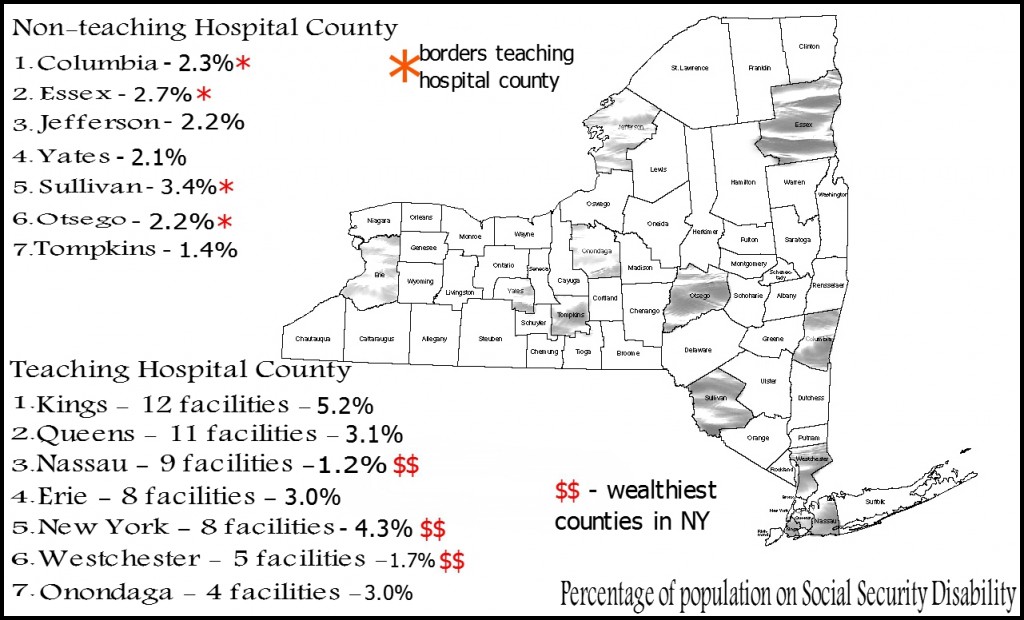 Uncle Sam is disabling America by supporting households that create broken-minded children. Instead of giving children the BEST CHANCE in adulthood, parenting choices are ROBBING them by setting them up for failure.

Uncle Sam pays a single mother to support fatherless children. One could say Uncle Sam IS the absent father. He pays alimony and child support, but has no legal say in how these children are raised? Mothers live free but cannot be expected to teach the basics of LIFE before sending the child to school as one of the MANY problem children disrupting classrooms?

WHAT ABOUT THE RIGHTS OF THE CHILD? How do they learn any other way?

Research by Dr. Alan Wolfelt shows children learn to react by watching the parent. National Center for Biotechnology Information (NCBI) agrees with me: that a parents’ actions ARE responsible for both the nurture and for part of the “nature” side: temperament. Olympic athlete studies show the earlier you start TEACHING, the better chances of a successful future.

Shouldn’t this be a MANDATORY goal of households supported solely by Uncle Sam?

The National Institute of Mental Health (NIMH) statistics regarding the mental illness in children, National Alliance on Mental Illness (NAMI) statistics, children on SSD, and anti-psychotics, TELLS the true story.

PARENTING IS CAUSING THE PROBLEMS WE SEE IN YOUTH TODAY!

In the early 1800s families were BIG: the more children, the more workers. Laws changed. No more working children 8, 10, 12 hours per day.

Suddenly men stopped producing large families at a such a high rate!

Maybe it was because of the DEPRESSION?

I speculate that New York’s William Sulzer, who introduced the 1912 Department of Labor Bill, is the one that kickstarted the Great Depression with the creation of the Children’s Bureau.

NO MORE parents breeding children as workers. No more choosing work over school. Perhaps taking away free child labor IS WHAT CREATED the Depression in the first place?

How IRONIC is it that Uncle Sam NOW pays SSD “paychecks” for children with ADHD and we are seeing a rise in large families again, in poverty stricken areas like Binghamton NY. Families with multiple children CURSED with ADHD, even though research consistently shows correlation between mothering patterns and the disorder.

Of course there are TRUE cases, but with self-preservation bias and self-reporting bias, we will never know what is happening in the homes that are creating broken children, but here is a writing about TWO cases of misdiagnosed ADHD, that I am personally aware of…