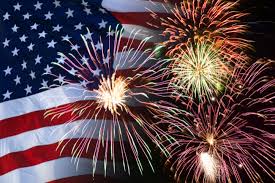 HOLLYWOOD—The 4th of July holiday is here, it will be filled with barbecues, beach days, fireworks and lots of red, white and blue. Celebrities, of course, are no exception. So let’s look at some places to enjoy the Fourth of July. If you are a beach person, you will love California with about 75 miles of coastline, you can enjoy anywhere from Malibu to Long Beach.

The 4th of July Fireworks at the Hollywood Bowl will feature Nile Rodgers & Chic. The performances are nothing but good times this Independence Day. The party of the summer, when they team up with the LA Phil for a three-night star-spangled celebration. The show also includes the orchestra playing some patriotic songs, a live drum line performance and, of course, fireworks. The tickets range from $19-$288.

You can attend the Queen Marys All-American 4th of July Celebration. Celebrate Independence Day aboard the historic RMS Queen Mary with an action-packed day for for the entire family. There will be live music, games, craft stations, a vintage airplane show, and tours of the historic ship. After sunset, you’ll be treated to a what’s said to be one of the best fireworks show in the area. tickets range from $29-$119.

If you are with your family you can attend the Coca-Cola July 4th Fest at Six Flags Magic Mountain, which include a nightly fireworks show in Valencia, California. It’s a summer block party at Grand Park and the Music Center. The event, which they claim is the biggest free Fourth of July party in the county, starts at 3 p.m. with two stages of music and entertainment. Two stages offer live music, including Boogaloo Assassins and DJ Linafornia.

Oh, by the way, there’s fireworks, set off from the roof of the Dorothy Chandler Pavilion. Grand Park, downtown and it’s free. Let’s not forget the Rose Bowl. This show is among the oldest fireworks in L.A. with the tradition now in its 93rd year. While doors to the arena open at 5 p.m., many folks start tailgating when the parking lots open at noon. Once inside, there are live performances and a family fun zone until it’s time for fireworks to blast off at 9 p.m. at the Rose Bowl, with tickets ranging from $15-$125.

What’s more American than a baseball game? This year the Dodgers are at home on July 4, taking on the San Diego Padres. After the big game, you’ll be treated to a special holiday edition of the stadium’s traditional fireworks show at the Dodger Stadium, with tickets from $33-$1000. Now, if you want a prime view of the fireworks overhead, it makes sense to get up high. WP24 by Wolfgang Puck is throwing a rooftop fete that includes classy cook-out fare and skyline-level views of the big downtown show.

In Hollywood, the Highlight Room is a great option, which typically hosts a July 4 bash. Tickets for $59. If you want to go to Pacific Palisades, it’s the 70th anniversary. To celebrate they are offering a charming, small-town style take on the Fourth. Patriotic pups, pie-eating, marching bands, and more, followed by a music-synced fireworks display by local legends Pyro Spectaculars. Tickets range from $10-$50. For those in Disney Nation, this annual celebration is your best bet. Billed as a “concert in the sky,” it’s red, white, and blue tribute to all things America. Expect all the usual Disney magic, plus enviable Instagrams of fireworks over the iconic castle. Well, that is, if Instagram is working, since it was down almost all day on the 3rd of July. It’s free with admission.

Movies at Hollywood Forever. Two great summer traditions outdoor movies and fireworks, so great together. Buy a ticket to Cinespia’s July 4 screening of “E.T.” or July 3 screening of “Mad Max Fury Road,” and you’ll be treated to a post-movie fireworks show at 6000 Santa Monica Blvd., tickets for $38.

If you decide to stay home, a patriotic movie to watch over the 4th of July weekend is “Rocky IV,” tensions between the U.S. and Russia were already strained in the late stages of the Cold War, and the death of Apollo Creed at the hands of Russian heavyweight Ivan Drago only made things worse. Rocky Balboa’s subsequent decision to beat the blond off Drago didn’t exactly bring the conflict to an end, but it was a close second for movie-goers in the mid 80s.

The Fourth of July is also a wonderful time to consider camping, and what better place to celebrate America than in one of its national parks. Many parks offer advance reservations for camping spots, and popular parks can fill up, so make sure to check before you load up the car and drive. The great thing about the 4th of July is that it’s usually chock-full of free entertainment: parades, and live music. It’s a great time to celebrate with friends and family. So, even if just for one day, raise that American flag proudly, get out the grill, watch a fireworks display, and listen to some great songs like, “American Woman,” by Lenny Kravitz or Jimi Hendrix “The Star-Spangled Banner,” or Alicia Keys’ ”Girl on Fire.”

Rose’s Scoop: Celebrities show up by the droves to watch Wimbledon 2019, from Janelle Monae to Rebel Wilson, one of my favorite actresses.

Wishing everyone a Happy, Safe, 4th of July!