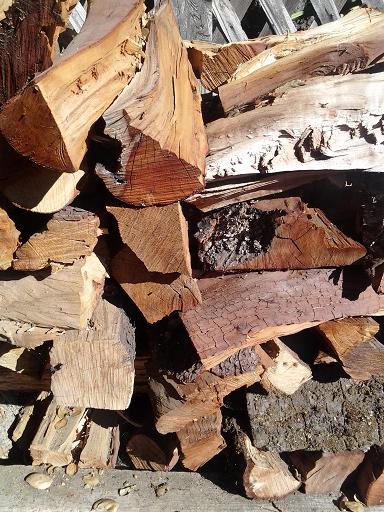 UNITED STATES—Fireplaces and wood stoves simply are not as common as they were only a few decades ago. Because of modern building codes, most that get damaged by earthquakes get removed or replaced by pellet stoves. The orchards that once provided so much inexpensive firewood while they were being cleared for urban development are now gone. The wood yards in the relatively arboraceous outskirts of town are farther away. Many municipalities have established ordinances to limit smoke, although this is not a problem if well seasoned wood gets burned properly, and only means that fireplaces can not be used on ‘spare the air’ days.

Firewood can be purchased from tree services that need to dispose of wood anyway. Because it is only a byproduct of tree work, it will likely need to be stored and seasoned the year before it is needed, just like orchard wood. (Firewood from wood yards gets seasoned before it gets sold.) Some types of wood that are often mixed in leave a bit more residue in chimneys, necessitating more frequent chimney sweeping. Realistically though, chimneys should be cleaned regularly anyway.

Because firewood is perishable, it should be obtained annually, in quantities that will be used in a single winter. It can rot if stored outside too long. If stored in a shed or garage too long, it can get infested with rodents. Besides, too much firewood occupies quite a bit of space.

Synthetic logs (made from compressed wood byproducts and fuel) are an effective, clean and efficient alternative to real wood that do not need to be seasoned. Each log burns about as long as several real logs, and produces about as much heat, so only a few go a long way. They are always available from supermarkets, and can be brought home with the groceries. Pellet stoves that consume fuel pellets that look like stove food are even more efficient. However, there is no substitute for a fire with real wood in a real fireplace or wood stove.

There was nothing common or soft about Rush, the innovative hard rock band of the seventies and eighties. Juncus effusus is only known as soft rush because the spiky and sharply pointed ‘foliage’ appears to be stiff, but is actually quite soft. It is common because in has such a vast natural range, including North America, Europe, Asia, Africa and Australia. It does not like hard rock, but instead prefers rich and moist soil, and will even be happy in soil that is too damp for other plants. Common rush tolerates a bit of shade but prefers good exposure. Because winters are too mild to freeze it back to the ground naturally, overgrown or discolored common rush can be cut down and then left to regenerate as winter ends.

The distinctive ‘foliage’ is not actually foliage. The minute leaves are unimpressive brown scales that do not do much at the base of each of the many upright green stems that function like foliage. The top six inches or so of each of these spike like stems is actually a bract that extends above the dangling but uninteresting tan or dingy yellow flowers that hang to the side. Collectively, the stems and bracts form distinctively sculptural clumps that radiate upward and outward. Healthy clumps are not much more than three feet high and wide.