SANTA MONICA—The Santa Monica Police Department is asking for the public’s help in identifying the perpetrators in a jewelry store theft that occurred on November 20, at approximately 3 p.m. 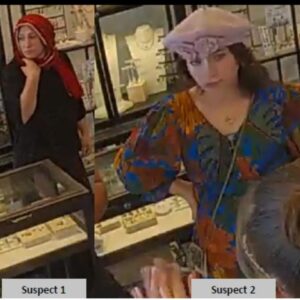 The SMPD posted on their Facebook page details about the five suspects who committed grand theft.

Suspects, two and three walked into the store and approached a salesperson where video shows one of them signaling the others to enter the store.

Four suspects kept the salesperson distracted while suspect number one went to the back of the store and stole jewelry from the safe and from the display cases. 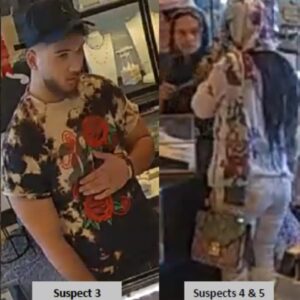 “The female suspects were wearing long skirts used to conceal the stolen items and may appear pregnant to avoid suspicion. All suspects were able to exit the store without the salesperson realizing the theft had occurred,” the SMPD stated.

The women were wearing head coverings/hats. One of the men had a beard and wore a tight t-shirt with a design similar to camouflage with another design printed on top of it and a black hat.

One of the female suspects had long black hair that could have been extensions. She had a scarf wrapped around the top of her head.

The vehicle the suspects used was described as a white 2004-2005 Toyota Sienna.